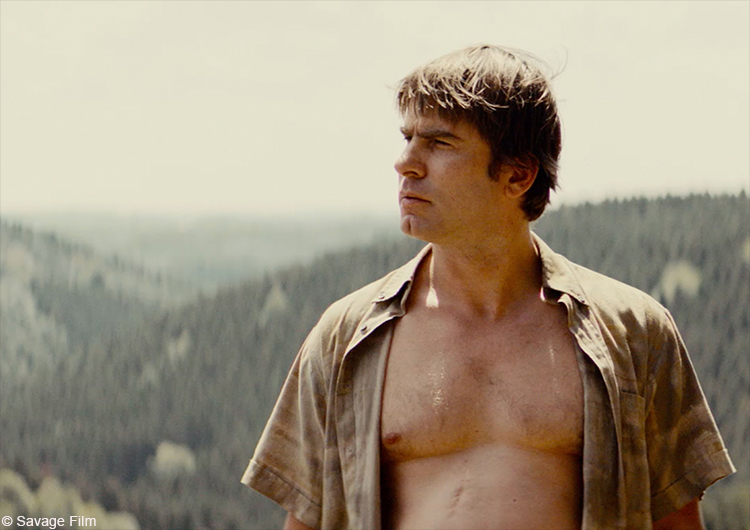 “Patrick” (originally titled “De Patrick”) is ready to hit the screen internationally. In this offbeat story, set in a nudist camp in the 1980s in the Belgian Ardennes, Patrick, played by Flemish screen star Kevin Janssens, seems to be an unusual and mediocre character: working at his father’s naturist campsite as the handyman who takes care of small repair jobs, and designs and builds furniture, he’s socially maladroit when it comes to dealing with his father’s death, while on the other hand he becomes preoccupied when he finds out that his favorite hammer is missing—one out of a set of seven. His search for the missing tool eventually turns into an elongated and carefully thought through quest that will help him to become another man.

The film could be described as a black comedy, a dark comedy, a comedy thriller, a tragicomedy, a dramedy, or even a psychological thriller with some horror elements, since “De Patrick” manages to find a perfect balance by combining and mixing ingredients from various film genres. That’s quite a challenge, especially since the peculiar protagonist of Patrick, a character who has no ambitions whatsoever in life, has little dialogue in the film. “Patrick is perfectly happy with the life he leads,” director Tim Mielants says, “he dreams his own dreams and not the dreams other people try to impose on him. He’s happy with the person he is, he’s happy with his fate, and as a man of few words he doesn’t necessarily feel the urge to participate in society’s rat race and he can ignore responsibilities others try to thrust upon him.”

Actor Jemaine Clement, from New Zealand, who is working now with James Cameron on the “Avatar” sequels, plays an audacious rock star in “Patrick,” hiding out at the nudist camp with his on and off girlfriend (played by Dutch actress Hannah Hoekstra). He reportedly described “Patrick” as a ‘slow comedy without punchlines.’ In the end, it’s a one of a kind and beautifully crafted piece of filmmaking.

Directed and co-written by Flemish filmmaker Tim Mielants in his directorial feature debut—he previously worked on several internationally acclaimed TV series, including directing the third season of the crime drama series “Peaky Blinders” (2016)—he based his story on his own experienes as a child when he spent a summer holiday with his parents at a nudist camp in the French Pyrenees during the mid-1980s. “The strange atmosphere, the characters I saw there, the bizzare situations, they stayed with me ever since,” he told me during an interview in Antwerp last month. He also found out that the campsite was managed by a mother and her son—the mother was blind and didn’t even know that everybody was walking around naked. Consequently, the character of Patrick’s mother, played by Katelijne Damen, is blind as well.

As Mr. Mielants was gradually developping his story and screenplay over the years, he wanted to include the five different stages of grief in the story of Patrick who’s trying to find his missing hammer: denial, anger, paranoia, depression and acceptance. The hammer perfectly symbolizes the loss Patrick is coping with, since during this psychological transfer in the film, the missing hammer basically represents Patrick’s own father and becomes a metaphor for his father’s death.

Kevin Janssens delivers an amazing tour-de-force performance as Patrick; the actor gained seventeen kilos over a seven week period, just to make sure he’d be the Patrick he had in mind. He could have turned the character of Patrick into a village idiot or a happy fool, but instead he chose to play his role gracefully, respectfully, and with dignity—adding a whole range of inner emotions and a substantial credibility to Patrick’s screen persona. A real class act.

In the meantime Mr. Janssens, a forty-year-old celebrated screen star from the Low Countries, has emarked on an international career after he had starred in “D’Ardennen” (2015), appearing recently opposite Gérard Depardieu (“Les confins du monde,” 2018), Jean-Claude Van Damme (”Lukas,” 2018), and in “The Room” (2019) he co-starred with a former Bond girl, French-Ukranian actress Olga Kurylenko from “Quantom of Solace” (2008).

Despite the non-sexual nudity throughout the film, “Patrick” is not about nudity at all. Says Mr. Mielants: “The film wouldn’t be truthful if not using nudity. Also, we considered it a costume drama, and those films are never interesting because of the costumes.” The cast of top-notch actors which he assembled in Belgium and the Netherlands, were all on the same page. In fact, Dutch actor Pierre Bokma who is like the Marlon Brando of the Netherlands, told him, “I’m only doing this film because it’s naked, otherwise I wouldn’t.”

“Patrick” was screened last month at the 54th Karlovy Vary International Film Festival. It was nominated for a Crystal Globe as Best Film, and earned Mr. Mielants the Best Director Award. After its world premiere at Karlovy Vary, the film preemed in Belgium yesterday and will be released next week on August 28. The U.S. premiere is scheduled at Fantastic Fest! in Austin, Texas, from September 19-26.

“The Patrick” was produced by Savage Film, Bart Van Langendonck’s Brussels based production company which also did “Bullhead” (2011, nominated for an Academy Award as Best Foreign-Language Film). International sales outside Benelux are handled by Beta Cinema.

The trailer of “Patrick”